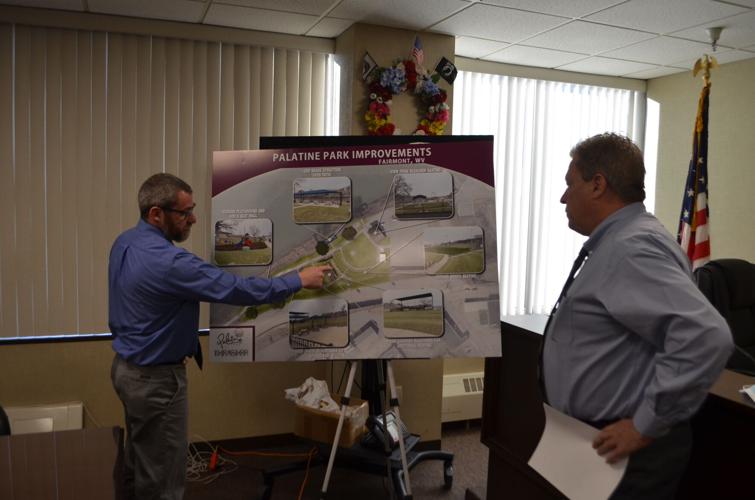 FAIRMONT, W.Va. (WV News) — The Marion County Commission announced Wednesday that it plans to invest $500,000 in Palatine Park this year to add shade and up to 300 new seats ahead of this year’s summer programming.

The plan is to add between 250 and 300 seats, most of which will be in a bleacher structure that will be set back from the amphitheater and field so as not to obscure anyone else’s view of the stage. In addition, new benches and picnic tables are to be added to the park, and most seating areas will get canopies or other overhangs to provide shade and shelter from the weather.

Each year, the park brings in thousands of locals and visitors alike through its summer series of concerts and other forms of live entertainment. Although the park and its events are free to the public — and will continue to be, even with the new seating — Marion County Commission President Randy Elliott said it was important for the county to make this investment.

“It’s very important to have things for people to do,” Elliott said. “You can’t charge the taxpayer for everything. To provide them with quality entertainment at a quality park at no cost is important for us. It’s something that the taxpayers and citizens of Marion County deserve. … The people deserve something for the taxes they already pay.”

Elliott said that additional seating and options for shade and shelter at the park have been needed for several years, and he’s happy that the commission — with the aid of The Thrasher Group, which designed the improvements — is finally able to set the project in motion.

“(Currently), you either have to bring your own lawn chair or blanket to sit down,” Elliott said. “If it’s hot out, you don’t have anywhere to get under shade. If it’s sprinkling out, the amphitheater is covered, but you have to put up an umbrella or something to protect yourself. With 250 seats for the people and canopies on top of them, it provides shade and protection from the rain.”Marion County Administrator Kris Cinalli, who oversees programming at the park, agreed with Elliott, saying that the new improvements will make for a better experience for everyone.

“I think shade is something we’ve been sorely missing, as well as additional seating,” Cinalli said. “I think it’ll all be a boost to the park, especially in time for the summer we have lined up. It’ll be perfect timing. It’s just exciting to see some new additions.”

If all goes according to plan, the majority of the improvements are slated to be made before the start of the summer 2022 event season at Palatine Park. While bids haven’t yet been sent out and the $500,000 is currently just an estimate, Elliott said that the money for the project has already been set aside over the past few years, some of it coming from contracts with EQT pipelines in the county and the rest coming from the county’s coal reallocation funds.

“It’s not going to cost us any money,” Elliott said. “We’re not taking away from the budget. We have the money set aside for these improvements.”

Since the park is free, the county will get no immediate, direct return on its investment, but Elliott said the money coming into the county because of the park and its events are more than enough to make the project worthwhile.

“They come and eat at the restaurants and buy gasoline and buy snacks to take into the park,” Elliott said. “We’re showcasing what we have there and the county is making money. We fill all of the hotels and motels up for a Bass Nation tournament because they can stay here and fish for three or four days. We’re making money, but in a roundabout way, and it’ll pay for itself many times over when you take into consideration the money spent here because of the park.”

“It’s an amazing investment,” Longstreth said. “We need to invest more in Fairmont in activities to keep the young here and bring young back here. This is going to that’s going to continue to grow, and we’re looking for other things, too. … This is one we already have stabilized, and we’re building upon it to make it even better for the public.”

In addition to the $500,000 going towards the park improvements, Elliott said that around $250,000 is set to be invested in stabilizing the bank at the park along the Monongahela River.

“The stabilization is going to create an additional riverwalk area that’s going to tie the riverwalk over by the High Level Bridge over to the amphitheater and the steps that go down to the docks, so you can actually go down the steps and walk the riverwalk all the way to the other end of Palatine Park,” Elliott said.

Finally, the commission gave a small teaser for what the public can expect out of the summer 2022 event lineup at Palatine Park, including cover bands dedicated to AC/DC, Chicago, Lynyrd Skynyrd and more.

Cinalli said that he’s very excited about this year’s events, and he hopes people come down to Palatine Park this summer to see the improvements and enjoy the free entertainment.

“I think we have an even stronger schedule than we did last year, and that’s saying something,” Cinalli said. “Knock on wood that we come out on the other side of this COVID deal and things are a little smoother than they were last year. We have the same team ready to go. We have been resting up and we know what’s ahead of us, and we’ll do what we can with what we can.”